There's a Starman Waiting in the Sky 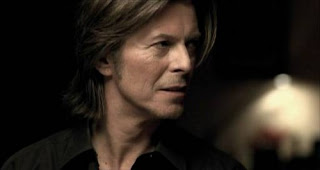 My alarm rings… I press snooze.

At 6:32 my alarm rings again, I slide my finger across the screen bringing blissful silence.

I notice part of an instant message that read, "Very sad."

My breath is gone.
I blankly type a response as I catch myself saying the words out loud.
"Nooooooooo. Oh, no, no…
New record just came out.
No, no, no…"
I type one last resonating word, "Heartbroken."

Numb legs slide out of bed and carry my body to the kitchen.
I turn on the coffee.
How can Bowie be dead?
I try to wrap my head around the news.
How did he die? This is a hoax, right?

The gurgle and hiss of the coffee pot sounds like a steam engine in my head.
The house is dark save for the light emitting from the screen of my cellular phone.

I open the web browser… 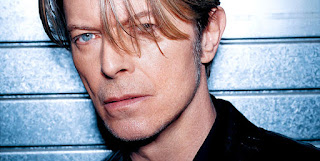 I can't process it. David Bowie doesn't die of cancer.  David Bowie lives to be like 100 years old, if he doesn't live forever--which I was pretty sure he would!
But Bowie?  No way!
Bowie goes out with a blaze of lighting and thunder as the earth shakes and trembles! ...Right?
After all, he is Ziggy Stardust!  Super-human!  Starman!
Certainly the entire Universe would have been aware the moment he drew his last breath. It should have woken me from my sleep in a sudden panic!
But no, he died quietly January 10th, 2016.

No explosions.  No bombast.  Just gone.

I welcome the hot water of the shower.
Standing with hands pressed against the wall, holding me up as water rushes down my face, washing free flowing tears down the drain.
It's all so cliché.
"Come on Kimmie, you're being a bit melodramatic don't you think?" I imagine him gently chastising.
No, he was an artist, full of emotion and feeling.
Bowie would understand.

I step out of the shower, grab a towel, and mindlessly dry off.
I feel duped!  He wasn't sick was he?
No one EVER said he was ill!
No one said he had cancer!

I throw the towel across the room, my movements now angrily punctuated.
I begin to dress as if it's the most distasteful chore--punching my arms and legs into the openings of each garment with a furious thrust.
I yank on my boots and stomp to the bathroom where I rip a brush through my wet, tangled hair.
Why was there no warning? 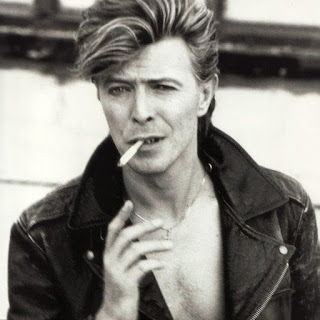 I still don't believe it.
Surely there would have been news before now that he was fighting such a serious battle.

I get it though. If it were me I wouldn’t announce it.
Hell, I'm a private person.  I totally understand keeping this secret.

So why do I feel like I've been tricked--robbed of some very important knowledge that would have made this news a bit easier to digest?
Instead I'm left in complete and utter shock.

I toy with the idea of calling in sick.
What do I say?  "I'm sorry I can't make it in today.  You see, David Bowie has died…"
They'd think I'm nuts!

You must understand.  For me, this is as hard as losing Lennon, in some respects more so because I was so young when Lennon was killed. I didn't have the years in that I do with Bowie.
Yes, for me this is every bit as shocking as Lennon.
No warning!  Sudden, violent in its own right, and totally unjust.

My girlfriend messages my phone to signify she's in the drive.
I absently grab my things and hop into the car.
She hands me a coffee.
Thank God for small miracles.
I tell her the news. She already knows.
We make small talk. A nice distraction.
She promises to help me mourn as she drops me at work.

Is it ridiculous to grieve someone I've never met?
Bowie put his heart and soul into his art, so to say that I knew nothing of him isn't entirely true. In that respect he spoke to me very intimately.
Plus, he was to be my husband you know.  I jokingly forewarned at the start of every serious relationship, "If Bowie shows up, all bets are off."
Still I never had the chance to see him in person.
I always hoped he would tour again.
The new record would certainly have included a tour right?
I'd finally get to see him live?

Nope. I will never see Bowie in person. Never. Ever. 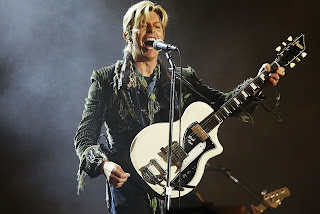 There is no consoling.  No solace or attempts at pleasantries will make me feel better.
"The genius of Bowie lives on through his music."--
Of course it does!
"His music is his legacy."--
Of course it is!
But he's dead and I’m pissed!
All the amazing music and art he had yet to create...
There will be no more from him. 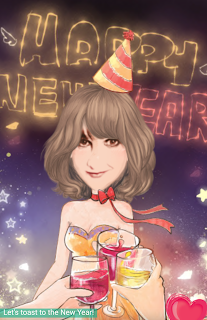 Happy New Year everyone! Someone asked me what my New Year's resolution is. My answer is fairly simple. I don't do resolutions. My theory has always been, and I've said this the past 20 years or so... You shouldn't need a special day to force you to do the things you should already have been doing all year long. New Years resolutions are too much pressure. They set you up for failure. Instead make a decision now to do the things you should. Just do it and keep at it-- whatever it is. And if you fall, get the F back up and try again.

Have an amazing year my friends. Be good to yourself and those around you. And just keep moving forward. Only look back for a moment to remind yourself how far you have come! Xoxo, Siren Kimmie