The Tale of Two Ladies 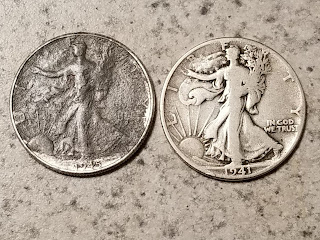 Their lives were markedly different, each with their own tale to tell.  One was well-loved while the other clearly experienced a much rougher existence. When detailing how they came to rest in the "Siren Hall of Honor" their stories were strikingly similar.  Then on one crisp winter day their paths would suddenly and remarkably intertwine:

"It was early in the year 2019," described 1941 "as I sat dormant in the dark, damp earth. I thought today would be just like any other; struggling to keep warm, praying water would not fall from the sky.

"I passed the time away, thinking of days gone by, when I would enjoy jingling in a local pocket with friends, or chatting away in a cozy cash drawer.

"The memories played before me like a film; so real I could actually hear the sound of the register bell.

"Suddenly, I was jolted from my dream as the chiming grew louder right above my resting place.

"'That ringing is real,' I no sooner thought to myself before the ground began to tremble and the earth shifted all around me."

"If I had a voice I would have surely screamed, fearing at any moment I would succumb to the jaws of the angry plow creature as was the demise of so many of my kind.

"My life flashed before me as a different beeping began, coupled with a strange sort of vibration that traveled through my entire being.  It grew in intensity as I was lifted in a clod of soil and gently flipped over before a bright blinding light was shinned upon my face.

"'That light!' I thought, 'that warm, glorious light!'

"Rays of sunshine dappled through what was once my earthly tomb. I had not seen the light of day in...so many years I lost count!

"I then heard a loud gasp as I was plucked from the earth and clenched tightly into the trembling fist of my rescuer.

Siren Kimmie, as she came to be known, proceeded to shout excitedly.  At first I thought she was angry.  She cursed repeatedly and called upon God.  I heard other voices too, 'detectorists', who responded with the same odd mix of anger and excitement.

"'Are you $!&*%@# KIDDING me?' a man shouted as he grabbed me and began a through inspection; while the other detectorist told Siren Kimmie to 'shut up', which I thought was kind of rude.  I became even more confused as then they started to rave about my beauty; now seeming well-pleased with my rescue.  But none more so than Siren Kimmie who subjected me to a careful examination and a gentle cleaning before my age was announced.

"I had no time to consider this odd behavior as I was placed into a warm, dry pouch.  Initially I feared I would return to a life of darkness but was quickly lulled by the sound of voices and the soft hum of an engine.

"Once we arrived at the Siren Estate, Kimmie provided me with what can only be described as 'the full spa treatment'.  I was given a warm, lavish bath and placed on a velvet bed.  I was then carried into the Siren Hall of Honor, also known as the 'Relic Room' where I was introduced to the sister I didn't even know I had: 1941.

"While telling her story, I learned how 1941 was also rescued in the same fashion just one week earlier.  Both of us ever so grateful to the circumstances which brought us together; we now live a much pampered life, in a climate controlled environment.  We have a new home, with a large family of coveted coins and artifacts, where we watch the sun rise and set each and every day."