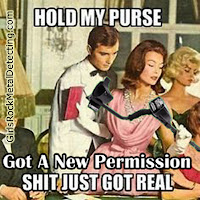 Here in the States we have a magazine known as The National Enquirer. It's the type of publication you'd reach for if you were interested in articles about "bat boy", Elvis sightings, or the latest celebrity gossip--certainly not a Pulitzer prize-caliber publication. The Sun is the UK's equivalent, featuring similarly sensationalized articles, having become infamous for their "page 3" spank bank images of bare-breasted women. Not surprisingly, the thirty-year running spread was axed due to outcries of misogyny, objectification, and a general consensus that the nudity was maybe a bit over-the-top for a daily reader. Yet The Sun's reputation as a tabloid with over-sexualized and dramatized stories remains firmly intact.

When I came across The Sun's article "GIRLS ROCK "; (in all caps) subtitled "Meet the treasure hunters making metal detecting cool…" my tummy did a flip-flop. I was perplexed over the use of my "name" and its prominent placement in the title. While it is true, I do not own the words "girls rock," they have become inextricably entwined with my identity. As proof to the confusion, messages began trickling in regarding my involvement in the article which embodies the complete antithesis of what Girls Rock Metal Detecting represents. Please make no mistake, I had no part in this collaboration and the use of "Girls Rock" is purely coincidental… I think.

The truth is, I find The Sun's article to be the most condescending, embarrassing, and insulting piece of "journalism" geared towards female detectorists that I have ever read. And before misconstruing my reaction as any sort feminist rant (which it fully deserves) or jealousy, please know that the only feelings I experienced while reading that rubbish was utter relief that my given name and projects were not included, along with abject disgust over the complete disrespect for women in this hobby. If you're going to tell the story of the female detectorist, then tell it!  Don't print some condescending reader grab drivel!

No offense to the women interviewed, some of whom found the article equally cringe-worthy. Nor do I cast any aspersions upon detectorist's whose motivations are different from my own-- as I have said before, there is no "wrong reason" for metal detecting. But the underling suggestion that all lady diggers are fame seeking opportunists using tits for hits is certainly not a true microcosm of the female detectorist! Equally disturbing was the overall reader response which seemed more preoccupied with the notion that women are not treated differently in detecting.

There could be no better evidence of differential treatment of women in detecting than The Sun article itself! I can think of a dozen women off the top of my head who deserve recognized for their accomplishments in metal detecting; however the only mention of achievements in the article was afforded to male detectorists. Instead The Sun insinuates that most lady detectorists are driven by popularity and an income. The article offered cleavage and cutsie instead of content, while patronizing the very subjects it claimed to be representing! Further exacerbating the issue were reader comments discussing who has the "nicest teeth", or arguing over which detectorist is "the hottest", only serving to punctuate the point.

Ask a handful of female detectorists about their experiences and you'll be surprised at their stories. Aside from the cat calls and car horns as they're bent over a target; online, women are sidestepping sexual innuendos, inappropriate comments, and unsolicited advances left and right. Meanwhile they're subjected to everything from slut shaming to being criticized for selfies or receiving too many likes on a post. Surfing though the murky waters of the web you'll find plenty of examples of sexy woman being utilized to sell products or increase views. You'll also find groups circulating pictures of naked women metal detecting along with rude comments like "Show us them tits…Nobody cares about metal detecting," (Seriously?) or the same tired pinpointer and shaft jokes. Couple this with manufacturers utilizing high-heeled women in bikinis, and now The Sun's article which adds its own special form of degradation….

Meanwhile the suggestion of a "tight-knit" group of women in the Facebook detecting community made me choke on my over-priced Starbucks. Some of the worst damage being done to the image of the female detectorist is being carried out against one another. Riddled with the cliquey-est behavior just north of the high school cafeteria; it is difficult to find groups devoid of bullies, drama queens, and meanies. Scrolling through any number of groups will quickly unearth examples of in-fighting and sheer ugliness. It's something I've continued to recuse myself from only to be ostracized for my lack of participation (much to my delight).

Just like any other hobby or walk of life, stereotyping is bad. There are some great groups and online magazines who are very supportive, but female detectorists do have to deal with occasional ignorance. The Sun article is a fine demonstration of that! They were given the perfect opportunity to provide an honest portrayal of female detectorists but squandered it for views. They are by definition the very reason I began Girls Rock Metal Detecting in the first place. Through my endeavors I have attempted to display the true spirit of female detectorists. And the simple truth is, we are not as enigmatic as one would think.

If you really want a true glimpse at our inner workings and what drive us in this hobby I will let you in on a little secret--Just picture a male detectorist. That's right, beyond complicated issues like, where we take a wee while out in the field, trying to find detecting gear not slathered in pink camo, and dealing with bra issues caused by poor undergarment choices—we are essentially the same. At the heart of it, detectorist are detectorists. Unfortunately that angle doesn't sell magazines.

Posted by sirenkimmie at 8:00 PM No comments: